The Royal Line of Umbria 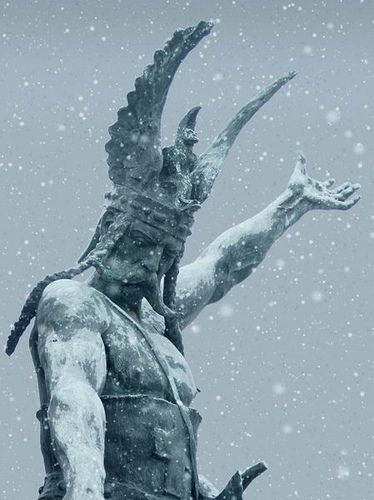 Though now a figure more of legend than history, King Vanceslav the White was the first to unite the roaming, warring clans surrounding Lake Umbra some five centuries ago. He married his son, Kresimir the Bold, to Lauryn Aulistytar (Daughter of King Aulis), thus securing the nation’s independence and a firm alliance with Kalavala the Great. He also took tribute from the dwarves and set a fence of iron around the lands of the feyfolk.

The true first dynasty of King Vanceslav the White lasted only four generations, with this great-grandson Kalin the Bereft, whose only son was slain when the Black Hoards descended from the Pohjola Hills to devastate the North. King Kalin attempted to adopt Luvarsan of Zachod as his heir, but this choice was rejected by the Druids. The Ring of Lords convened, and forced Kalin to marry his eldest daughter Nadeja to Davor of Phandalin. Davor soon moved the Ursine Throne from Kingsreach to Czarisc. However, he died of pox after just two years of rule, by which time he had only a single newborn daughter to his name.

This is where succession becomes murky. King Kalin had five daughters, all of whom married into noble houses in the realm. Each of these made their own claim to the Ursine Throne. In addition the Luvarsyn, a vocal contingent in the eastern cities, claimed that Luvarsan of Zachod was the true heir of the throne and that the early death of Davor was proof that the gods had rejected his claim. The Luvarsyn were soon declared heretics by the Circle of Druids, but never died. Umbria thus disintegrated into squabbling city-states at the same time that Kalavala the Great fell.

About a century later, the Blackrot Plague nearly completely decimated the country. Whole cities were depopulated, and vast tracts of farmland reverted to wilderness. After the plague passed, the Ossiri Pikelords, by this time a nominal tributary of Callain, led Callainer expeditionary troops north to seize what holdings remained. In the year 242 Anno Callaini, General Emanuenul Galca soon set Reven of Czarisc over all the lands of Umbria, but neither the General nor the Druids would allow Reven to be named king. Instead, he was titled the Lord Mayordomo (Mayor Superior), Watchman and Keeper of the Northlands of the Callain Empire. The current Lord Mayor Superior claims direct descent, though the branches of the family have been pruned quite often by wars and assassinations in the three centuries since. Since by this point Czarisc had been reduced to a mere village amidst the sinking ruins of a once-great city, Revan moved his capital eastward, building the city of Revan’s Gate on the ruins of an older city that had been built into the cliffs overlooking the lake.

A little over two centuries ago, in the year 300 AC, an alliance of the Luvarsyn and the descendants of Prince Vasska and Princess Katia (Kalin’s second daughter) waged a guerrilla war with the support of the Circle of Druids and the demi-human folk of Umbria. This alliance, which became known as the Shadow Rebellion, succeeded in driving the Callainer from all but the southernmost holds of Umbria, as well as forcing Lord Mayor Velosk D’Revan to flee Revan’s Gate. The inner circle of the Rebellion, known as the First Lords of Umbria, manage to maintain the country’s independence for nearly sixty years. However, they were ultimately destroyed when the Sanguine Brotherhood, having spent a generation infiltrating the First Lords of the Shadow Rebellion, succeeded in turning the Lords against each other in a six-month period known as the Six Blood Moons. The separatist Umbrian leadership was almost completely wiped out and the Callain Empire re-established its dominion of the north. The Callainer crucified every one of the First Lords, along with their families and especially their heirs, that they could find, but rumor persists that one or more “true heirs” of Vanceslav the White remain in hiding to this very day.

A century ago, after an exceptionally dry summer, the steppes as far west as the Greensward catch fire in an event forever after remembered north of the Inner Seas as the Red Dawn. This resulted in famine in all of the shepherd lands from the Lake of Tears to Umbria that summer. However, the grass grew back so bountifully that the years following are remembered as Matka’s Repentance.
During the thirty years of the Repentance, Callain expanded its hold into the Umbrian region, building roads and developing Aramoor, Ravensgate, and Zachod as fortified cities in the Callainer fashion, with high stone walls. This came to an end in 484 AC, when Emperor Alaric IV ascends the Amaranth Throne of Callain. He promptly withdrew most of his troops from Umbria, Urlaen, and Sulrain to vie with Galadan over control of the Elenion Sea. Seven years later, the Markovic Rebellion succeeded in driving the remaining Callainer legions out of Umbria, in no small part because Callain decides that Umbria is not worth fighting over. The Lord Mayor Superior of Ravensgate again becomes the de-facto ruler of Umbria, though the Druids still refuse him the title of king.

Within eight years, citing the Lord Mayor’s inability to stop the raids of the Golden Riders, Lord Bodhan of Cevorik rebelled against Ravensgate’s rule, touching off a three-year civil war in Umbria. By the end of the war, Duke Bodhan had destroyed Ravensgate’s control west of the Black Alder Swamp and created the Cevorik Duchy. However, despite claiming descent from Vasska and Katia and to be the scion of a (secret) unbroken line of First Lords, Bodhan is forbidden by the Druids from proclaiming himself King of Umbria. Nevertheless, he has become the single most powerful person in the land, taking tribute from both Ravensgate and Zachod.

However, Zachod is ruled by Prince Tijan Miskovic (LN hum F10), a near-legendary warrior in his youth who rumor says is the true scion of the Luvarsyn. He disdains the Lord Mayor of Ravensgate, but despises Duke Bodhan as a traitor to Umbria for his attempts to bring the “decadence” of the south to Umbria.

The Royal Line of Umbria