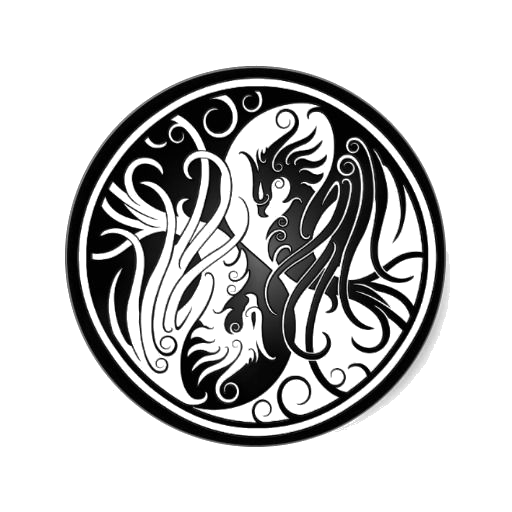 Beyond even the Outer Planes which are the realms of spirit and the gods, or so the sages and wizards of the world tell us, lie the blinding light and goodness of the positive plane and the eternal darkness and evil of the negative plane. These are thought of as two eternal opposites, eternally in balance, unthinking brute realities from which everything else is created and is destroyed. In this schema, the positive plane is thought of as the force of Creation, and the negative plane the force of Destruction. This ideal forms the basis of many faiths in Newold, particularly the faiths of the Eternal Balance found in the lands of the East, like ‘Olam.

As is often the case, the common belief is simplistic at best. In truth, it is the so-called positive plane, exemplified in the symbol of the Phoenix, which is the Destroyer. But again, that is too simple. The Phoenix fundamentally represents energy, chaos, and change. It’s opposite is the negative plane, symbolized by the Wyrm, which represents entropy and stasis. In alignment terms, the Phoenix lies somewhere between chaotic neutral and chaotic good—for the ultimate end of all of its destructive change is breaking old bonds so that new orders might be built—while the Wyrm is solidly lawful evil. Perhaps the greatest personification of the Wyrm in full dominion is the Big Brother of George Orwell’s 1984.

The ultimate expression of balance between the two lies between lawful and neutral good—an ordered world, but one which allows room for growth and change. Sadly, such moments of balance are rare, as societies inevitably fall into corruption or become weak and libertine and disintegrate into increasingly smaller tribes. Such minor imbalances are usually corrected in the smaller conflagrations of war, famine, or other disaster.
The ultimate imbalance between the two is found in the chaotic evil of the Abyss: Chaos with no chance for growth. When such a state takes place, when the Wyrm slays the Phoenix entirely, the result is always a conflagration of the world, a purifying holocaust that only a few survive.

Both the Phoenix and the Wyrm are sentient and sapient, but their thought processes are completely alien to human thought processes. They are not gods in the normal sense (the gods are, after all, the personifications of nature, while the Phoenix and Wyrm transcend nature) and do not have priests or worshippers in the normal sense. However, both choose champions in every generation.

I am the Phoenix, the soul of Ra,
and the guide of the gods in Duat (Hades);
let it be so done unto me that
I may enter in like a hawk,
and that I may come forth like Phoenix,
the Morning Star.
- The Book of Doors
Inside timeless halls I wander
Within the deepest thoughts I dwell,
Under ancient earth I slumber
Until the Worms of Madness swell.

Even thus by the great sages ’tis confessed
The phoenix dies, and then is born again,
When it approaches its five-hundredth year;

On herb or grain it feeds not in its life,
But only on tears of incense and amomum,
And nard and myrrh are its last winding-sheet.
-Dante, Inferno Canto XXIV

Nor shall this peace sleep with her; but as when
The bird of wonder dies, the maiden phoenix,
Her ashes new create another heir
As great in admiration as herself;
So shall she leave her blessedness to one,
When heaven shall call her from this cloud of darkness,
Who from the sacred ashes of her honour
Shall star-like rise as great in fame as she was,
And so stand fix’d.
- King Endari of Westerlin

He knows his time is out! and doth provide
New principles of life; herbs he brings dried
From the hot hills, and with rich spices frames
A Pile shall burn, and Hatch him with his flames.

On this the weakling sits; salutes the Sun
With pleasant noise, and prays and begs for some
Of his own fire, that quickly may restore
The youth and vigor, which he had before.
Whom soon as Phoebus * spies, stopping his rays

He makes a stand, and thus allays his pains……
He shakes his locks, and from his golden head,
Shoots on bright beam, which smites with vital fire

The willing bird; to burn is his desire.
That he may live again; he’s proud in death,
And goes in haste to gain a better breath.
The spice heap fired with celestial rays
Doth burn the aged Phoenix, when straight stays
The Chariot of the amazed Moon; the pole
Resists the wheeling, swift Orbs, and the whole
Fabric of Nature at a stand remains.
Till the old bird anew, young begins again.
- Emperor Claudian II