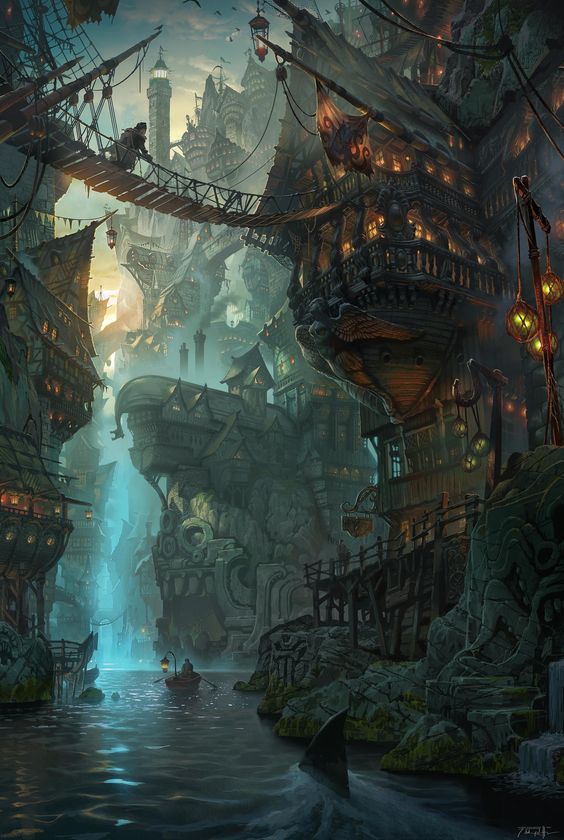 A city built into the cliffs overlooking Lake Umbra; many towers and bridges and streets that grew by happenstance rather than by any central planning. In other words, a labyrinth of narrow streets and allys, with house built upon house built upon shop or guildhall. Only a lower level of hewn stone built into the rock of the cliffs keeps the whole city from blowing away in one of Lake Umbra’s infamous storms. The city that never sleeps and never shuts up. Being the main gateway to the south, has a lot of wealth (and smuggling, and other illegal activity) passing through it. The craftsmen have banded together into tight-knit guilds for protection against thieves and the government—but I repeat myself.

The ruler is the Lord Mayor Superior Ylradin d’Reven, who claims direct descent from the near-legendary founder. His offices overlook the bay, and are open for your bribery and graft needs late into the night. For those who lack gold, he is willing to trade favors, and is the master of making offers one can’t refuse. He operates through a cadre of thirteen Bosses, each of whom fought and assassinated their ways up the ranks to their current position and are extremely adept. Two of the Bosses are rumored to be wizards. (This is of course a silly rumor—one is a sorceror and the other is a warlock). The Bosses have carved the city into informal and ill-defined territories, and there is regular street-warfare at the boundaries. The Lord Mayor Superior encourages these to keep any of his bosses from getting too strong.

The Sword and Amulet Inn ( click here), run by innkeeper Aldref, who is basically Jeremy Irons’ version of Alfred. Party has taken rooms on the second floor down. They have access to a balcony overlooking the canal.

The Trickster and Flagon Tavern ( click here), north of the Bazaar, near a monolith of rune-carved stone. Its neighbors include the grand hall of the Merchants Guild and a simple traveler’s shrine. It is a simple wooden shack, with a single salvaged stone wall and a dirt floor covered in straw. It is exceptionally filthy, and poorly lit by a few tallow candles. Accommodations consist of a few small rooms with straw mats. The Tavern is said to be atop the lair of the infamous Worm Cult.

Abby of the Sisters of Solace, an order of veiled nuns who tend to the dead and dying (something Ravensgate has no shortage of). The Abby is marked by a crow which hangs in a cage outside the door and questions visitors who would seek entrance. The Sisters are a surprisingly cheerful and engaging lot. 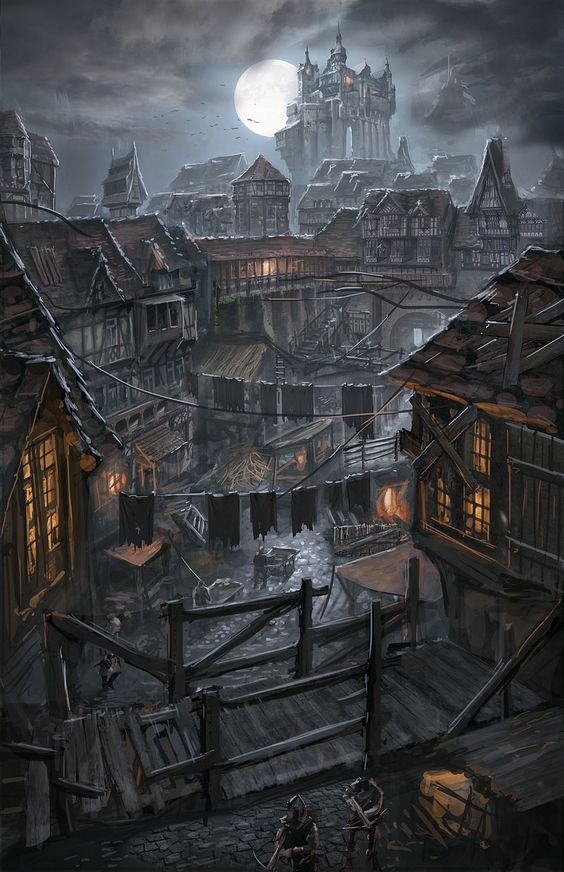 Dalric the Sage, unusually young and hyperactive, lives in an enormous if run-down mansion just off the Bazaar 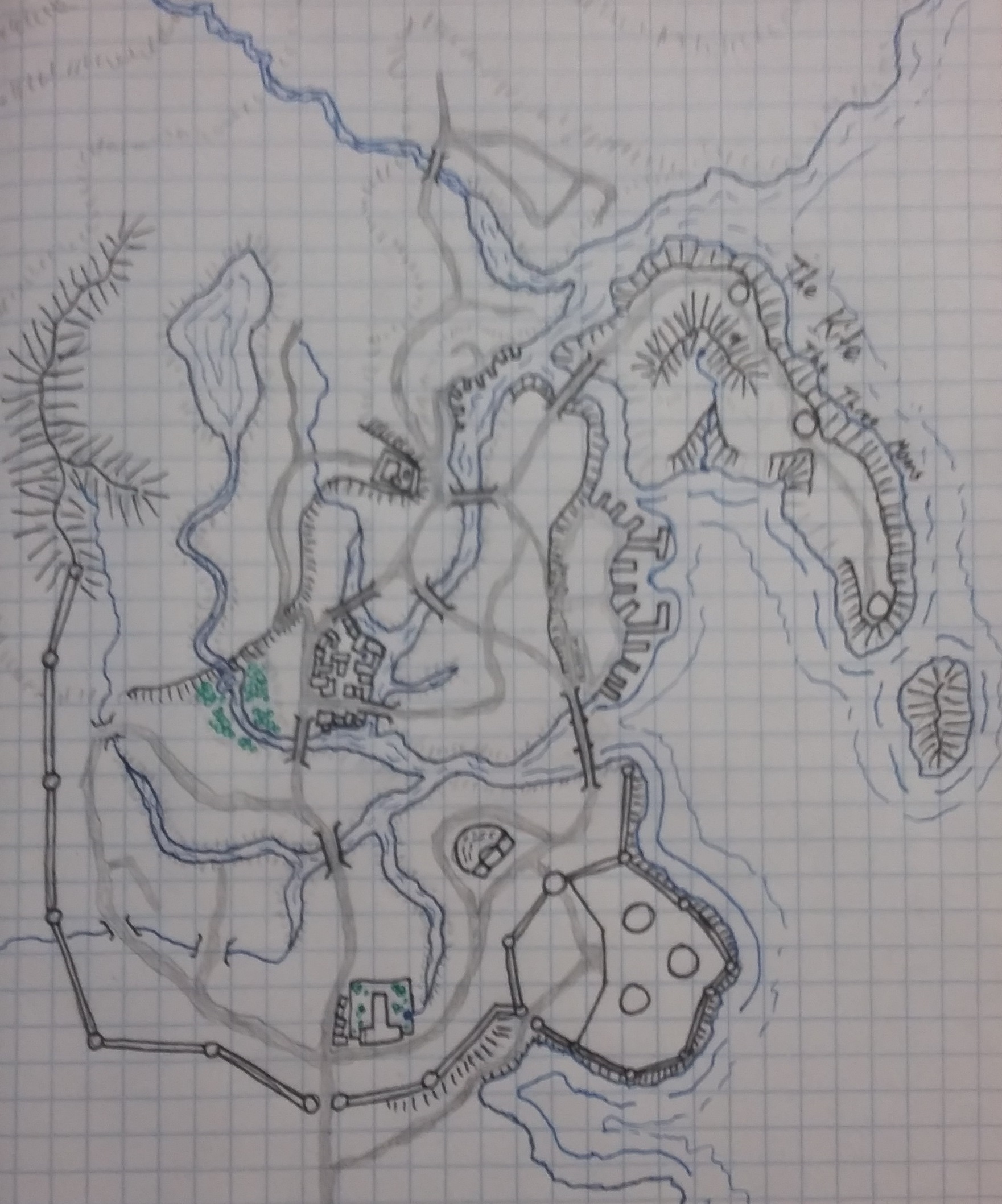 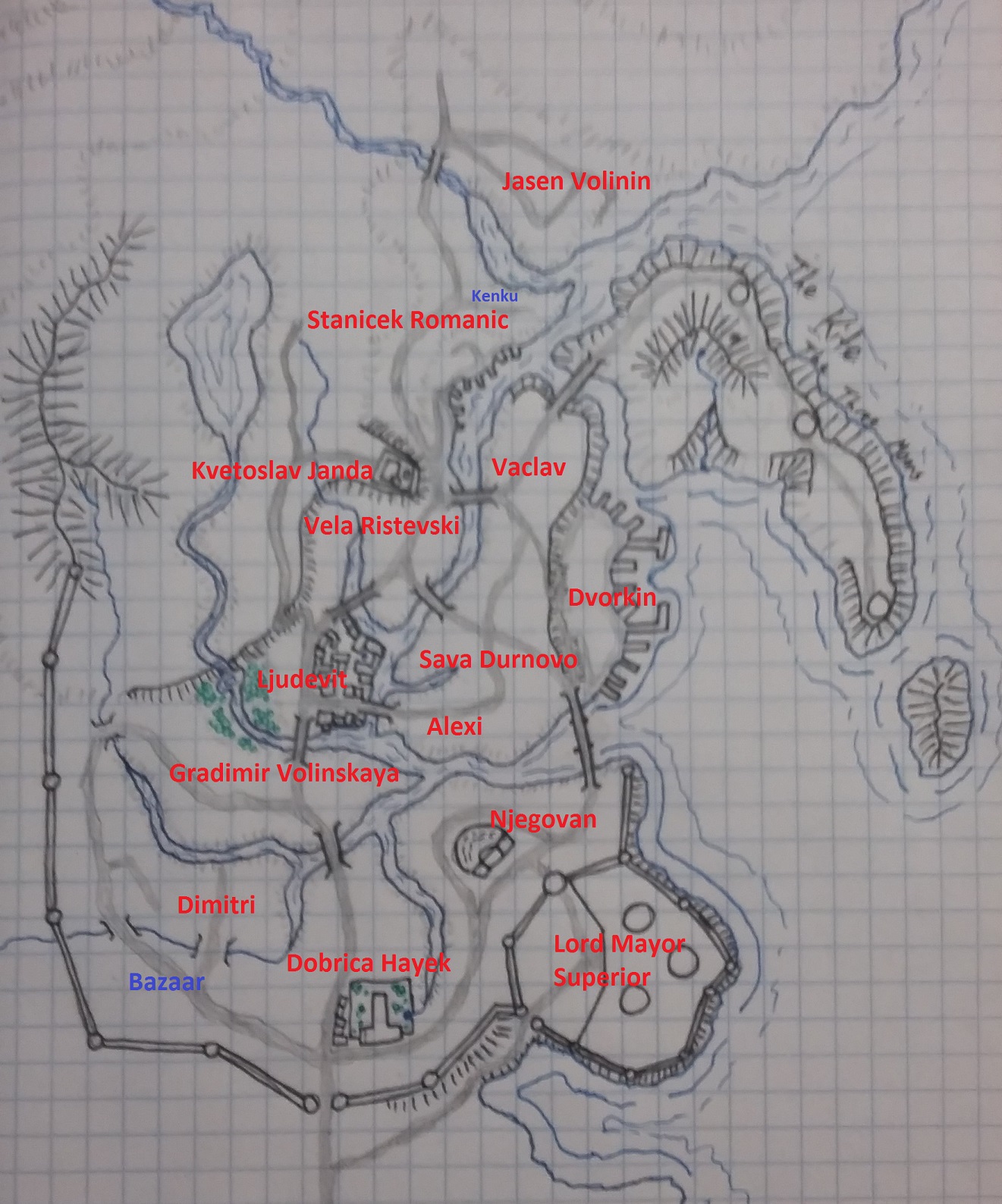 Vaclav – actually maintains his residence on the Kite
Vela Ristevski – rumored to be a wizardress. Vela is the youngest of the bosses. She was installed 7 years ago and took Stanicek’s territory. She relies on her own power and not an army of thugs. She is likely a Warlock. Stanicek and Kvetoslav are Vela’s chief rivals.
Stanicek Romanic – boss in the Kenku district, have been no purges since he came to power fourteen years ago. Has loosely allied with the party; obviously intends to develop these contacts from the Empire (as he believes them to be) to become the new Lord Mayor.
Dvorkin – controls the main docks, gets a cut out of everything shipped across the lake
Dmitri – controls the Bazaar, does not tolerate failure, styles himself a businessman.
Sava Durnovo –
Ljudevit
Gradimir Volinskaya – frequently clashes with Dimitri over control of parts of the Bazaar, rumored to have studied magic for many years
Njegovan
Dobrica Hayek
Jasen Volinin
Kvetoslav Janda – controls the manor district around the lake and is therefore the gatekeeper to many of the wealthiest citizens of the city
Alexi – young and brash, but allied with the party after they saved his life from a sorcerous assassination attempt.